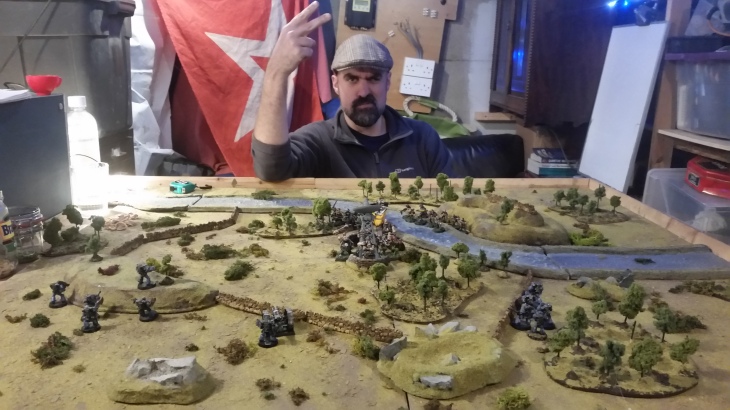 What happens when two Oldhammer fans catch up for the first time face-to-face in too long?

Models get busted out. A shed gets filled.

And dice plans don’t work out the way you expect.

This weekend over two nights two games were played.  Both games were Dan T.  Aka “The Indestructible Celt”  Vs myself Shaun A. Aka “Ming The Mirthless”

We ended up settling for some Imperial Guards Vs Space Marines the first night – calling them Renegade Imperial Guard, as they were Ming’s team you could even suggest a chaotic taint. Thus the Space Marines were a small advance ‘Purifying’ team sent in to check for signs of chaos taint.

Note to self: Don’t I have an entire box of Chaos Cultists & Proxies somewhere as yet un-built?

These were all based on stats and equipment from the Rogue Trader Compendiums – including original 1st Edition Space Marine stats [T-3] – marines just used to have better equipment and weapons choices – so that’s how we modelled the set-up.

FYI a certain evil Ming once got his Chaos Marines equipped with Nukes and Viral weapons and virtually wiped out an entire Guard platoon in a few shots. Ah… Blood for the Blood God.

The Marine Assault Squads had a pretty non standard mix of weapons, but we decided to just use the oldest metal marines The Indy Celt had.

So yes that’s all original late 80/ early 90s metal on the game table – and then play it WYSIWYG.

We’re both more that capable of mis-remembering rules, using rules from another edition, game or inventing mechanics on the spot.

We have both over the years become frustrated with UGO-IGO. But instead of a simple alternating unit actions – the suggestion this time from Indy Celt was using playing cards.

There was a lot of initial scurrying around – with the Ogryns marauding around very slowly through rivers, Marines jumping around from cover to cover – either of walls or woods. And the Imperial Guard made their way uphill.

At one point the Comms tower seemed important. I suspect in hindsight it’s an old chess habit of control the centre, control the game.

Afterwards I  argued a few angry Ogryns stomped out the chance of the Marines calling for backup. Or they might have just knocked out the wires in passing. They are relatively dumb after all.

Just as there was about to be some significant melee between Ogryn & Marine units – The Tech-marine with Rapier weapons platform rolled into line of sight of the Guard units up on  the hill.

The first roll by the advanced & very well equipped Tech-marine was a 1. A fluff  – with the biggest & deadliest weapon in the field.

The Renegade Guard had no idea what had occurred.

And even if they had, they most likely would have run! 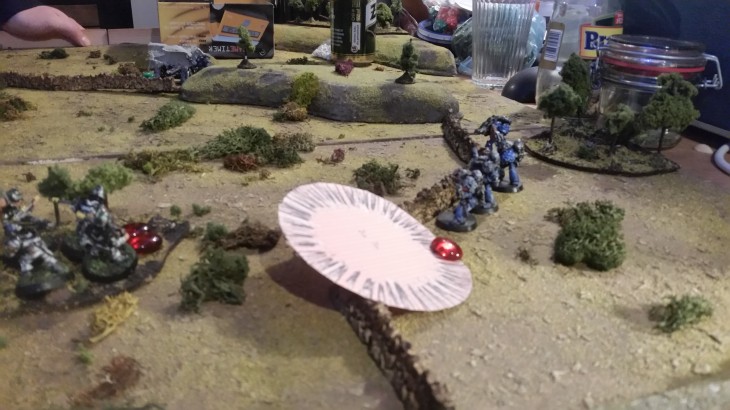 The Tactical Marine Squad picked off wood hiding Guards with ease – and the retaliatory grenade went off target. 3 blood markers for lost Guard – 1 blood marker for a lost Marine. Yes, that’s the Guard taking themselves out.

It was at this point Indy Celt suggested use of some extra game elements to keep things interesting.

The card selection for turn move was already keeping things highly unpredictable – as a good battle should be.

A nice giant roaming Dinosaur – a T-Rex nicked from his daughter’s play box – So in the end we did put a plastic model on the table – but at least it was fully painted.

The Giant Dinosaur is in the rule book on Pg.221. Rogue Trader has all sorts of scenario & plot & campaign elements built in. But non of it is compulsory.

One of the early compendiums even has rules for programming robots with auto commands. But that’s a whole other story from another game… 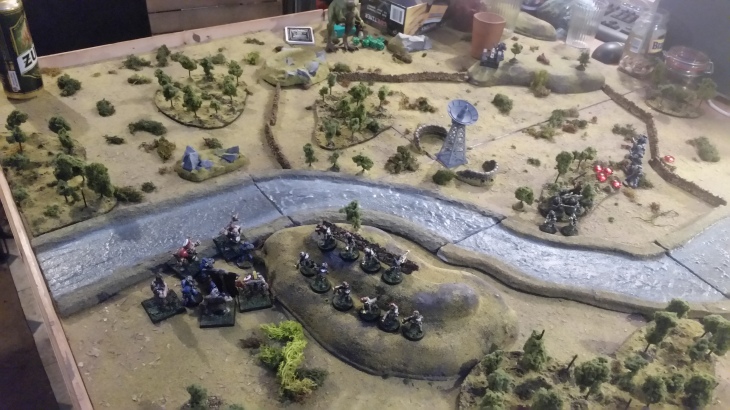 At this point the battle field had been split into two areas – Renegade Orgyns all shouts and smashes on top of  one remaining Tac Marine squad.

As the cards continued to randomise which unit got to act, or react, the Tech-marine fired his multi-laser rapier at the scurrying guard – but if you’re paying attention, yes that’s another 1, another complete miss!

The battle continues to spiral into the madness that is the fog-of-war – smashy Ogryns actually routed the marines – who proceeded to run from the battlefield. (!?!?!) 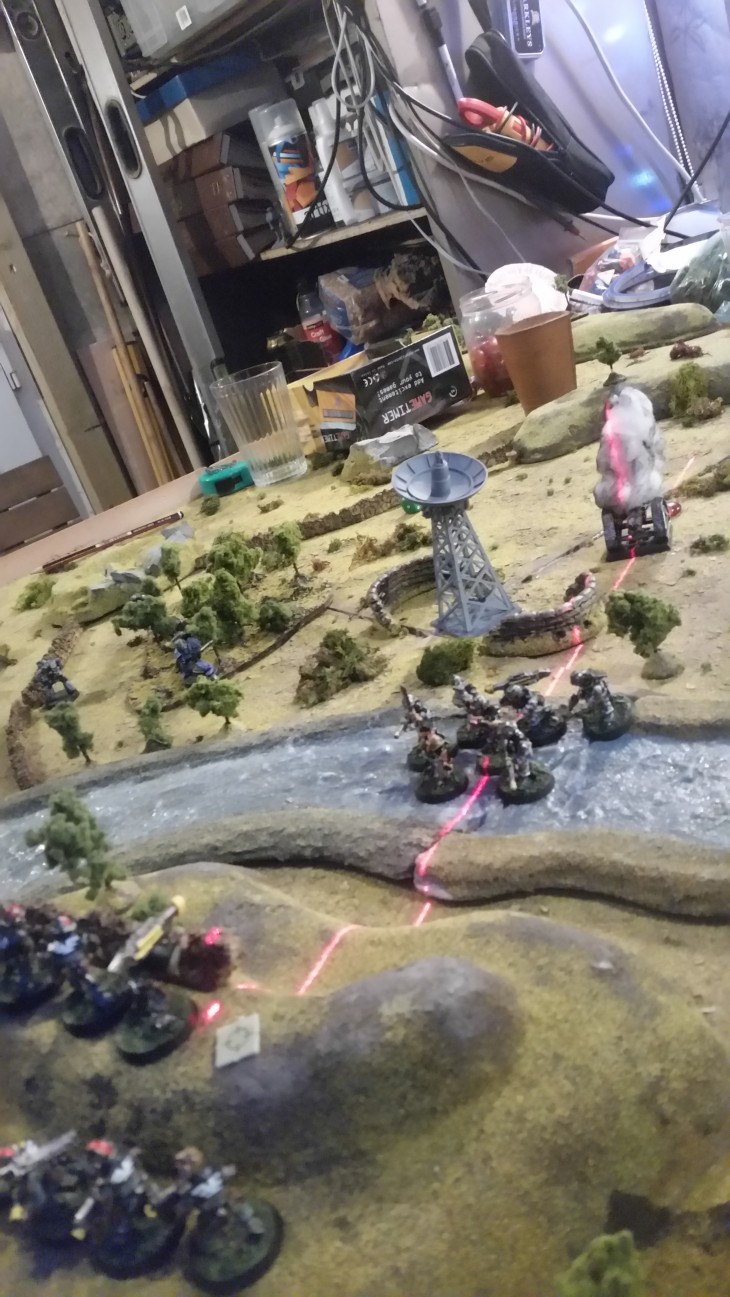 Next the solitary Lascannon Trooper  – and really the only high yield weapon on the Renegade’s side – one shotted the rapier as it was moved into line of sight.

I could feel the fuming Tech-marine across the battlefield.

At some point in every game, the best laid plans devolve into chaos.

The previously panicked Marines regained their resolve, but at the same time, the Renegade Commander became increasingly emboldened, and with numbers attempted to swamp the remaining Marines on this side of the battlefield. 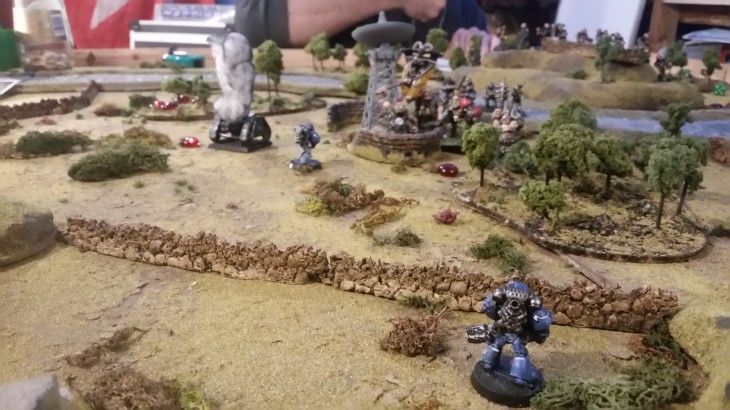 Whilst this occurred on the other side of the table – the Tech-marine and the remaining Assault Marines began to sweep out of the way of the T-Rex and the howling Orgyn.

The Red Mist aka the hint of Khorne, finally shows itself in the Renegade Guard.

They turned, and shot straight at the Dino.

The multi-melta Marine on this side of the battlefield was seemingly battle weary & wandering around directionless.

The Tech-marine failed to act, and was savaged by the raging Orgyns, while at the same time the T-Rex thundered across the battlefield towards the tasting looking Guard. 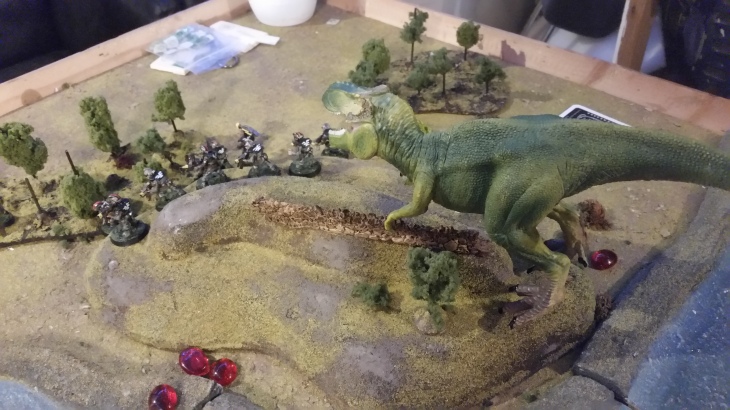 For once the Guard performed as expected, and turned and ran! Who wouldn’t given the scale of the attacker? – the Renegade Commander wasn’t present to shoot deserters.

With a roar the Orgyns continued to stomp around and rear assaulted the T-rex – but that didn’t really matter as they couldn’t actually hurt it! They are indeed to stupid to care.

The random cards then enabled both players favourite shot of the game – the Lascannon Trooper who’d aced everything else – took aim, and shot the T-Rex down first attempt.

We both couldn’t stop laughing… while we laughed, the Orgyns tucked into a ‘dinner’ meal of scorched T-Rex flesh. And well deserved their feast was. 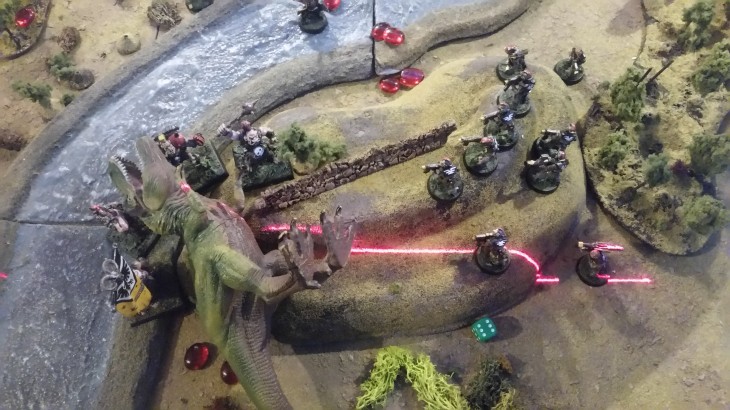 There aren’t photos of just how many troops that one Lascannon Trooper shot – but to borrow a Starship Troopers reference – he would absolutely be the lead character in a promotional video – sadly he’s a Renegade – so it’s more likely Khorne would grant him a gift. And the Realms of Chaos books have some amazingly useless ‘gifts’ that would likely be bestowed.

And no we didn’t play all rules correctly. But the players are the ultimate arbiters of what they do – not the rulebook. I don’t think we even looked after recording some basic stat lines

And that’s why I’m still modelling, painting, and trying out games.

My inner man-child still likes to have fun.

LATE EDIT: I’ve just been reminded that the multi-laser rapier had follow on fire hitting on 2+.. so yeah The Renegade Guard definitely had a chaos blessing that night!:

The same weekend we constructed a scenario to see just how tough a 10 man unit of Terminator Marines would be when assaulting an infinite supply of Genestealers on a Genestealer hive…. Unbalanced? Yes? Fun? Hell yes.